Remember, our property spread overlays a map of Hong Kong, and the influences are the same if applied to your home or office. 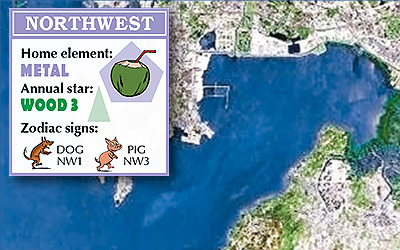 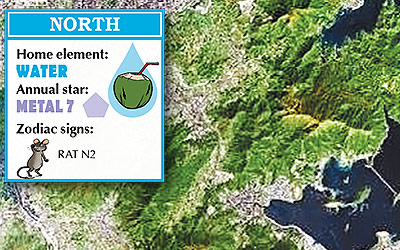 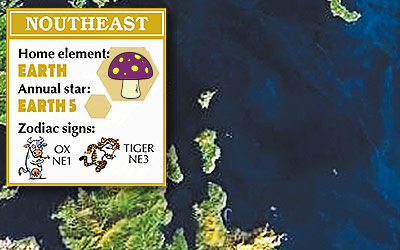 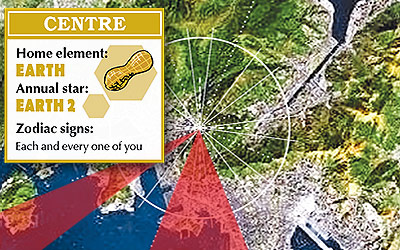 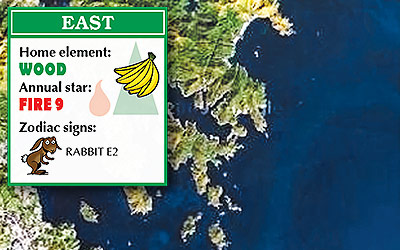 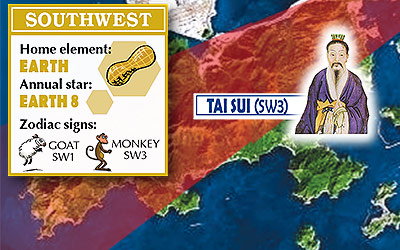 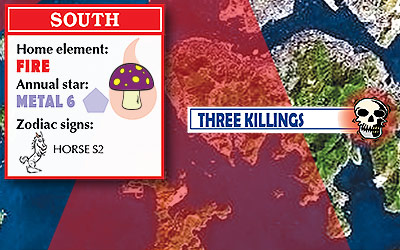 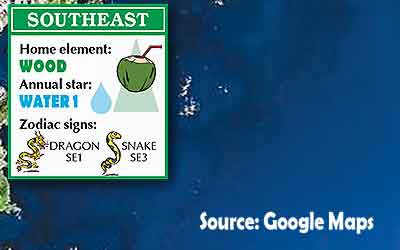 Welcome to the Battle Royale where good stars fight bad influences and vice-versa. In the South, we have the Three-Killings spreading their joy. Opposed to them are three stars of fortune: Star 1 in the South-East favouring patronage and academic fortune; Star 6 in the South spreading attenuated wealth and general good fortune; and Star 8 in the South-West, the biggie of them all pushing back against those hateful and destructive vapours. In the West, home of our sacred Earth Rooster, is woody Star 4 - quite the cheery chap. So expect clearer skies out at the airport.

The West has our bananas rating. Star 9, ahem, future prosperity, is now sitting unassailed in the East. Despite belonging to Brer Rabbit, not being the best of pals with our Rooster, it still looks very promising and gets our second bananas rating.

Other coconuts will be dropping from the trees for your amusement, with possible profit in the north and North-West, and the South-East. The South-West and Centre have enough afflictions to get the peanuts rating, while the South and North-East get nothing but the toadstool.

Three Emerald is the inauspicious star in this corner this year. Think of it as a cantankerous elderly relative. You’re hardly going to throw them out but they do make life unnecessarily difficult. What to do? Ameliorate those effects by placing pink items there (centres for criminals are decorated with this colour as it calms everything down).

The North is visited this year by the Seven Red, quite a violent star which often brings burglaries, lawsuits, fires and such in its wake. If you think you can repaint your door a coffee-colour, that’d be good. Make sure all of your preventative and secure measures are up-to-date. Everything from locks on windows to fire-fighting equipment.

Less than ideal as that’s where the Five Yellows (Wu Wang) are holding court; their bag of tricks involves unexpected troubles and major illnesses. Mostly you’ll want to focus on mitigation, thus grey furnishings and bronze implements or strings of coins placed underneath will assist. The Suipo, Year Breaker, star is also here so no renovations!

This year the west has the Four Green star, which is good for romance and self-improvement. How to make the most of this? Have some sort of water feature there, fresh flowers in a dark-coloured vase, or even just keep a glass of water in the area - that’ll attract the right vibrations. No need to go overboard or you might get a little too much romance.

Home elements: Earth
Annual star: Earth 2
Zodiac sign: Each and every one of you
Comments:
Disease, sickness and general deflation, only if you’re in the market for a medical centre.

Visited this year by the Two Black star, traditionally responsible for illness and accidents. Mitigating these effects can be done with laying green carpet, or some rugs in the area, remaining quiet there, and even placing some strings of metal coins under those rugs (just remember to get them up next year!)

The Nine Purple star, a bit of a chameleon as it is gearing up to preside over the next cycle that begins around 2024. Thus it also portends good things for the future, if your door faces east then open the door and let the sunshine in, and while you’re doing that put some bonsai in the same area, that’ll amplify the general goodness here.

Finally, the south-west has the Eight White star this year. This is mostly good for finance and your career path. It’s an especially potent star if treated well so adorn the area with red, red, red. Remember the Tai Sui is in here as well - so this is where the Guan Zhong image should be placed. No large amounts of metal, and keep the air flowing.

The south has the Six White star governing the sector. Normally it brings wealth and good blessings, as well as study-related endeavours. Dark coloured floorings work well with it. The Three Killings are here this year so best to avoid doors in this area, or use them discreetly, renovations to this sector should be avoided - drop in a Laughing Buddha.

Home elements: Wood
Annual star: Water 1
Zodiac sign: Dragon SE1/Snake SE3
Comments:
Star of good reputation, not that any of us are bothered by face.

The star for this corner is the One White; it often presages the patronage of those who can make a difference to your life. Its benign effect on relationships can also carry over to meeting people who will become close to you. If you’d like to get involved with someone then grey is the colour. Green decorations will keep relationships humming.