The list of governments introducing mandatory quotas for female directors on corporate boards is growing. California became the latest in October 2018, joining a club that includes Norway, Iceland, Finland and Sweden. And while it’s true there is still active debate around whether quotas are the best way to improve gender diversity on boards, there is now little question that gender diversity has to increase.

In Asia, while female representation on boards is improving, the region still lags badly. On the positive side, a number of exchanges have included quotas for gender diversity in their listing requirements. Australia, India and Malaysia have specific targets (30% for Australia and Malaysia, and at least one board member for India), and stand out for lack of male-only boards, according to our CG Watch 2018 survey. Singapore also has a specific target for 20% women’s participation on boards by 2020, rising to 30% by 2030. Meanwhile, Japan, Taiwan and the Philippines specifically mention gender in their listing requirements.

A woman’s work
However, as the case of Japan shows, words do not necessarily lead to action. Along with Korea, Japan stands out for its lack of female board representation. More than 60% of boards have no female representation in Japan. For Korea, where the listing requirements do not reference gender diversity, that number is more than 80%. 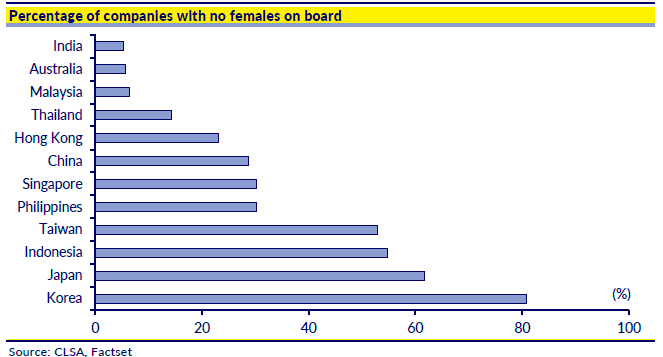 Japan is moving in the right direction. The number of women directors is growing rapidly in absolute terms — from only about 100 in 2011 to 900 in 2017. However, they still only account for 3.5% of all directors. And change is likely to remain slow. A survey from Japan’s Ministry of Economy, Trade and Industry in 2017 of 874 listed companies found only 9% intended to increase female participation, only 22% wanted to increase the number of external directors, and just 10% planned to diversify the experience of external directors. A mere 2% said they would increase the ratio of foreign directors. Not surprisingly, our CG Watch survey found minimal to no disclosure on gender diversity in Japan.

Even in some of the top performing countries, there is still more work to be done. In a 2018 report from the Australian Council of Superannuation Investors, CEO Pay in ASX 200 Companies, the trade body states that it was unable to analyse gender pay diversity due to insufficient numbers of female chief executives. ‘There were more CEOs called Andrew in the ASX 100 sample than women,’ it noted wryly.