The transformative power of Chinese millennials

Millennials, born between 1983 and 1998, represent a massive demographic that is young, educated, and at ease with technology and rapid change. Asia is now home to almost one billion millennials, with three-quarters living in India, China, Indonesia, Japan and South Korea.

The figures for China are particularly striking. According to Euromonitor, Chinese millennials numbered more than 309 million in 2017, making up about 22% of the country’s total population. It’s no wonder that this generation is dominating consumer expenditure on different segments and driving consumption premiumisation in Asia. 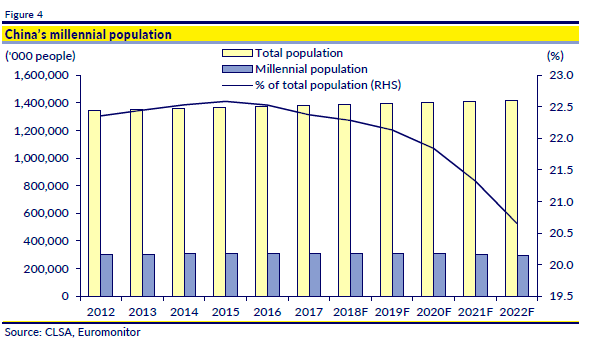 Different perspectives
Millennials have different perspectives and priorities than their parents’ generation which tends to sacrifice present consumption for the future. Chinese millennials, in particular, are much more affluent than older generations, as the average number of children per household dropped from 1.55 in 1990 to 0.94 to 2020. They are also moving up the income curve. In 2017, more than 40% of Chinese millennials earned more than the average gross income.

In addition, thanks to the support of accumulated capital from older generations, rising income and the government’s improved healthcare and pension systems, Chinese millennials tend to save less and spend more.

As a result, companies around the globe are now focused on luring Chinese consumers it can be more of a challenge to win their custom. In the apparel market, Chinese millennials do not always have a strong positive bias towards foreign brands and are always keen to try new things. Their willingness to experience also makes their preferences increasingly individualised and segmented, and the shift in preference occurs faster than previous generations.

There is certainly room for Chinese millennials to usher in an era of more local niche brands. Furthermore, unlike Generation X who are more price sensitive, millennials in China give more credit to design, customisation and quality, thus they buy more luxury goods including luggage, handbags and clothing. Chinese consumers account for 30% of the global luxury-goods market in 2016, up from 18% in 2010, according to our China retail Luxury Redefined report.

Chinese millennials also have more leisure pursuits as a high portion of their income goes to travel. When it comes to the consumer expenditure on leisure and recreation, China is expected to grow its contribution to Asia total from 7% in 2000 to 57% in 2030.

The demographic weight and economic purchasing power of Chinese millennials should not be underestimated. As they move from their 20s into their 30s and 40s, their rising wealth is expected to spearhead a US$9.1tn increase in consumption by 2030.