China set to mine greater opportunities from cloud adoption

Even though China’s cloud market represents just 4% of the sector’s global revenue, investment and sales are expanding at a rapid clip. Encouraged by government policies, innovative home-grown tech giants and the imminent launch of commercial 5G, the country is on track to grab a much bigger slice of the pie.

Currently, China’s cloud services are mostly infrastructure-focused (known as IaaS) with server, storage and database making up the majority of revenue. But gradually other models will improve their visibility, specifically platforms to support application development (PaaS) and the delivery of computer programmes by vendors on the web (SaaS).

According to forecasts from technology market intelligence firm IDC, China’s SaaS market could see a 32% four-year CAGR over 2019-2022, driven by government and enterprise digital transformation. Many companies have already taken the first steps to digitise their front-end (i.e. users, goods and services) and are now entering the second phase which involves upstream supply chain and downstream customer relationship.

Not only will this cloud growth allow China’s tech leaders to diversify their revenue streams, it will also present opportunities for a range of industries, including retail, healthcare and manufacturing, to revolutionise their business operations. 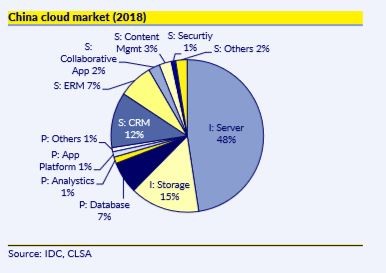 Making China’s cities even ‘smarter’
As China ramps up IT spending on software, its smart city development will have the scope to get bigger and faster. Beijing has increased emphasis on digitising municipalities, with capabilities to collect, process and utilise data to generate actionable information, improve services and enhance citizen’s lives. An example of this is gathering real-time data on road conditions via cameras and sensors to better manage traffic signals and consequently ease congestion.

While the country’s first-tier cities, such as Shanghai and Shenzhen, led the initial charge, other urban centres like Wuhan and Hangzhou have caught up quickly. In Chengdu, for instance, 5G drones were deployed during the Chinese New Year holiday to assist with traffic management and to identity suspicious behaviour. Elsewhere in Guangzhou, the authorities have created a healthcare platform digitising some eight million patient records to provide seamless access across hospitals and medical institutions.

These smart city functions are likely to become even more efficient, sophisticated and ambitious as China rolls out the largest 5G network in the world.