China’s rental housing policy is more about the country’s capacity expansion rather than housing. No longer can economic growth be driven just by a few tier-1 cities. To facilitate progress, China is building new cities that can host more world-class companies to expand growth capacity. Tier-2 cities are aware of the opportunities and are competing for a key resource to move up the value chain: new talent.

In 2017 the race to win over China’s eight million university graduates who qualify for the hukou offering truly took off. Rental housing is seen as important as it can help retain talent by offering a good quality of life, thereby fostering a bigger pool of competitive businesses and income. Hence we believe home prices will go up, instead of down, in the coming four years.

For example, Wuhan used to be a city famous for its heavy manufacturing, particularly iron, steel and automotives. By 2015, the city had grown its advanced manufacturing to more than 800 international companies including names like Siemens, Schneider Electric, and Saint-Gobain. In addition, the Wuhan East Lake New Technology Development Zone (WELHDZ) is the biggest industrial base for lasers in China, and includes more than 200 companies with a domestic market share consistently over 50%. Wuhan Bio-Lake in WELHDZ was ranked the second largest biopharm park in China and in total, eight out of the top 15 biopharm companies have factories or R&D centres in Bio-Lake.

Tier-2 is now number one
As a result of investment over the past decade, the difference in economic scale between many tier-2 and tier-1 cities has narrowed sharply. Wuhan’s GDP grew from 31% to 46% of Beijing’s during 2006-16, Hefei’s has almost doubled from 13% to 24%, and Chengdu’s from 33% to 47%. China will be more powerful with 10 tier-1 cities, instead of the current four. Moreover, as tier-1 cities reach growth bottlenecks, some tier-2 cities will become the country’s new growth drivers.

Specifically, tier-2 cities can accommodate more growth as living costs, including housing, are significantly more affordable. By home price to income ratio, the average of the top half of tier-2 cities at 8x is less than half of tier-1 cities’ 18x. 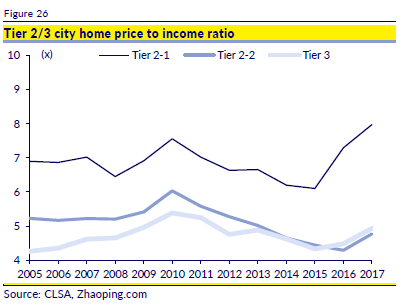